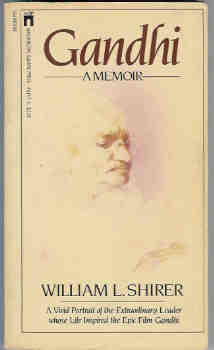 265 pp., index. Spine slightly creased, minor edgewear and bumping, PO name inside. Text is clean and unmarked. "William L. Shirer, Pulitzer Prize-winning author of The Rise and Fall of the Third Reich, became a personal friend of the extraordinary Mahatma Gandhi when he covered the momentous independence movement in India for the Chicago Tribune. Their friendship revealed Gandhi in his many facets - the saintly apostle of non-violence, the shrewd politician, the impish wit, the zealous revolutionary whose triumph was ended by an assassin's bullet. Gandhi; A Memoir sheds a special... View more info