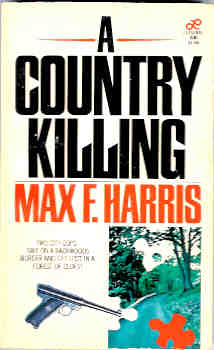 "Did the son murder his father? That's what the southern country sheriff can't find out, and that's what brought two city cops off the pavement and into the swamplands. Detectives Parrish and Recks bushwhack their way through the backwoods, a southern plantation, and more suspects than they can handle -- mentally or physically.
Soon they uncover blackmail, two wanted criminals, and become involved it -- as if they needed it -- a young couple with shaky marriage plans."; Remainder; 16mo - over 5¾" - 6¾" tall
View More...