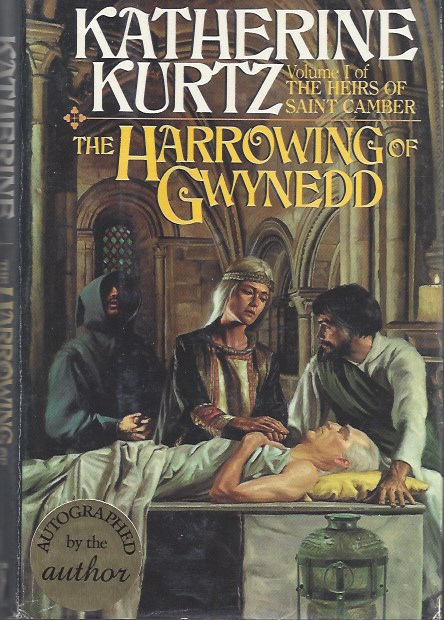 Volume 1 of The Heirs of Saint Camber series.
" Evil times had come for the Deryni. The Regents of the boy-king Alroy sought the destruction of all that race. And now Bishop Alister Cullen was dead, depriving Deryni of their greatest friend, for that was the body that Camber of Culdi had worn for twelve long years. But neither Camber's daughter Evaine nor his son Father Joram could be sure. Camber's body lay unchanged and incorruptible. Was it a sign that he had worked a final spell to hold off death? Or had Camber really become a saint? Whatever was true, the effort to save the Deryni had to continue. There was a way - dangerous and uncertain - to remove the Deryni powers from many so that they could pass as merely human, to scatter into anonymity and survive. While that great effort went forward, Evaine pursued the most perilous quest of all - to find among ancient forbidden scrolls the spell that might release Camber." ; Signed by Author

Title: The Harrowing of Gwynedd (Signed) (The Heirs of Saint Camber Vol 1)